On the Trail – Lake Havasu

On the Trail – Lake Havasu

I hit the snooze button a couple of times before I finally realized that it was actually my alarm clock telling me to get up this morning. My small camper on the back of my truck sleeps well when I am on the tournament trail, equipped with a heater and an electric blanket it is quite cozy so long as I am plugged in at a campground somewhere. I managed to make my way outside and began to adjust to the sudden temperature change, from a nice and warm 70 or so to the cold outside air that was 35 degrees. This was my first day of pre-practice for the Mississippi BassMaster Invitational on Ross Barnett Reservoir.

I was here about 13 months ago for the same tournament last season. The lake was muddy then and it is muddy now. The lake has an enormous amount of bass and proves to be an excellent fishery year in and year out even with heavy fishing pressure. We have just hit it again when the Pearl River is really flowing bringing in run-off and turning the lake off color. There is still some good areas to fish but all the tournament fishermen will be piled on top of each other fishing what clean water is available. These conditions usually make a lake fish small during big tournaments.

When I put my boat in this morning the water temperature was 46 degrees, water temperature of 50 or less should always remind you to be extra patient and fish extra slow, especially when the water is muddy.
I pulled out two rods, one with a 3/8 Stanley Platinum Wedge Spinnerbait (chartreuse) and one with a 7/16 Stanley Jig. I added a pork chunk to the jig and up the river I went. I started looking at pockets off of the river, protected water from the current and also the fresh muddy water the river was bringing down.

The water was cold everywhere, mostly 46 and 47 degrees. I did find some clear water way back in some of the pockets but that also put me back in the woods where there was so many trees that the sun would hardly be able to penetrate to warm the water. I fished the back pockets until around noon and then decided that I could come back to these areas during the official practice just before the tournament.

I went down the river a few miles until it opened up to the lake. I then checked the back of some of the bays where the sun could really pound if it were to ever come out from the overcast skies. I ran flat weeded banks for a couple of hours before I finally caught one on my spinnerbait, the fish was very light in color and weighed about two and a half pounds. Considering the conditions catching one fish in an area could mean there is a whole bunch of fish there. I didn’t catch anymore fish in that bay but I will certainly look at that spot when I come back.

Before I finished out the day I caught two more on the spinnerbait to bring my bass tally to three. Not much for nine and a half hours on the water but believe me it could have been worse. I talked to three competitors on the ramp who all said that they never got a bite all day. Fishing is very tough and if east Mississippi does not get some warm weather before we come back in two weeks it will be a very tough tournament.

Mother Nature always has something to dish out and this particular week it is cold weather and rain. For a very shallow lake like Ross Barnett that is a tough combination. But as usual one of us will figure out how to catch them better than anyone else and will walk away with forty thousand bucks, hopefully me!

The tournament is February 12th, 13th, and 14th. You can check the results daily on the internet by entering BASSMASTER into a search. – Lake Havasu

The Gift of Conservation – Lake Havasu 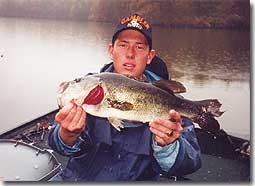